Over the years, the one-time street artist KAWS has given the KAWS treatment to many familiar pop icons. His first ever foray into popular culture saw the birth of his Companion in the visage of Mickey Mouse.

In the last few years, we’ve seen everything from Spongebob to Snoopy given the crossed out eyes in his paintings and sculptures.

Well, it looks like the artist has found his newest muse as revealed in The Creators’s exclusive preview of his first museum show in the UK simply titled KAWS. The show will be on display from February 6th to June 12th at the Longside Gallery of Yorkshire Sculpture Park.

Takashi Murakami: 500 Arhats at Mori Art Museum is Takashi Murakami’s first major solo exhibition in Japan in 14 years since the show at Museum of Contemporary Art Tokyo in 2001. Despite being a Japanese artist and producing his works in Japan, Murakami has not been an active participant of Japanese contemporary art. Majority of his works are found in foreign museums and private collections, mostly in Europe and US with Middle East and China quickly catching up, but market in Japan for Murakami’s work is described as “nearly non-existent”. This could most likely be attributed to the artist’s ambivalence to the role of Japanese contemporary art in the global context, which meant that Murakami has heavily focused on showing his work to an international audience outside of his home country. 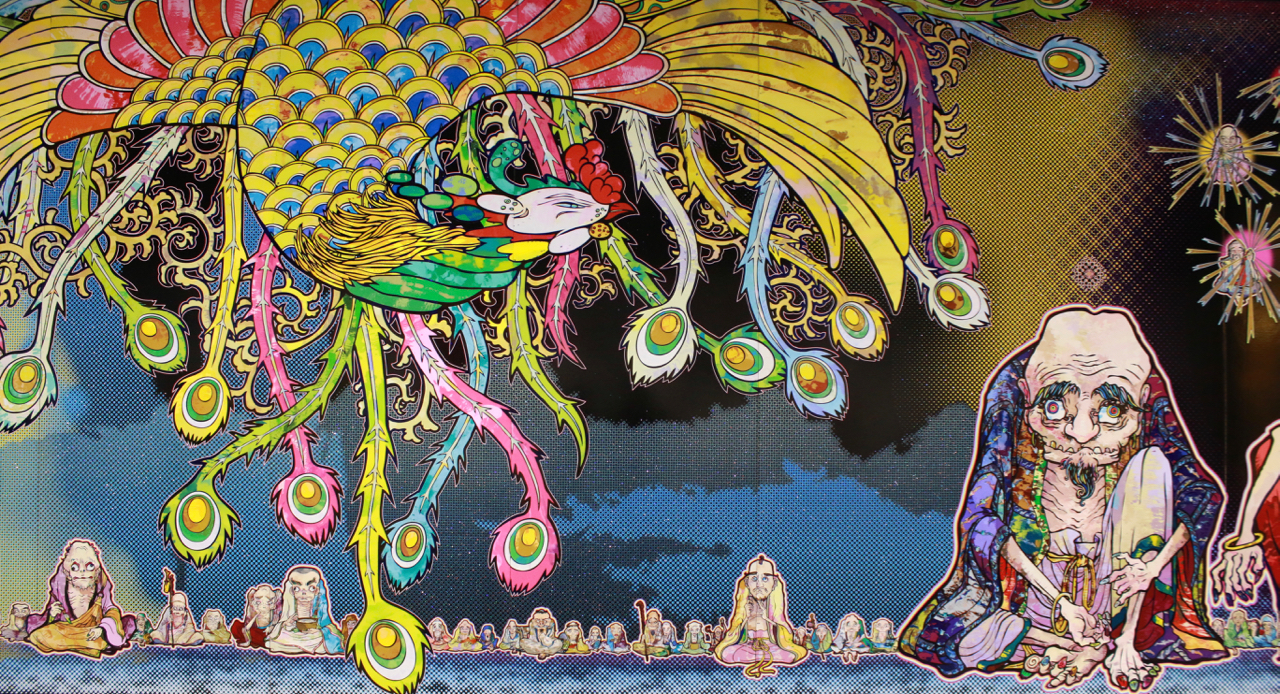 So why return to Japan to show his most ambitious painting to date? The curator of the show Miki Akiko offers several possible reasons: Murakami had a deep respect for the late founder of Mori Art Museum, Minoru Mori, who devoted his life to a single vision of building Tokyo into the burgeoning city we know now. In that sense, Mori and Murakami were cut from the same cloth. Another reason might be that this show is a big “f-you” to the Japanese critics who never really considered him to be of importance. Conversely, it is also a big “thank you” to the 300+ young staff of his studio that collaborated with the artist to complete this huge project in less than a year. But most importantly, it is a word of encouragement to the Japanese people that suffered so greatly during the 2011 Tohoku tsunami and earthquakes and a warning siren to carefully consider new nuclear plant plans and prepare for future natural disasters. 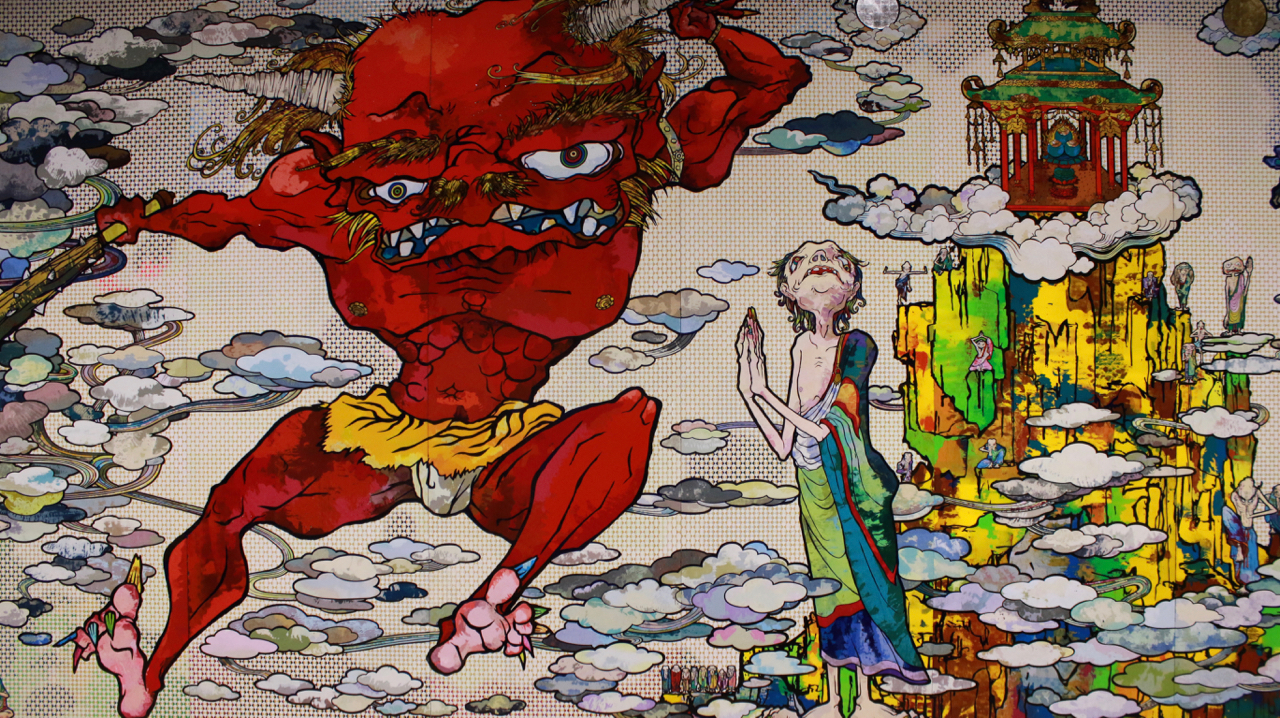 Although there are 40 new paintings and sculptures from the artist on display, as the title of the show suggests, the main event is the 100 meter wide painting, The 500 Arhats. The painting was started just shortly before the 2011 Great East Japan Earthquake in March 2011 and first displayed in an incomplete form in Qatar as a show of gratitude to the nation that promptly came to the aid of Japan in the wake of the disaster.

The 500 Arhats are Buddha’s enlightened disciples, the equivalent of saints in Christianity, and are believed to possess supernatural powers and able to heal 500 different types of suffering. In addition to the arhats, the painting includes 4 creatures of Chinese myth that preside over each of the cardinal directions: Blue Dragon in the east, Whiter Tiger in the west, Vermillion Bird in the south, and Black Tortoise in the north. 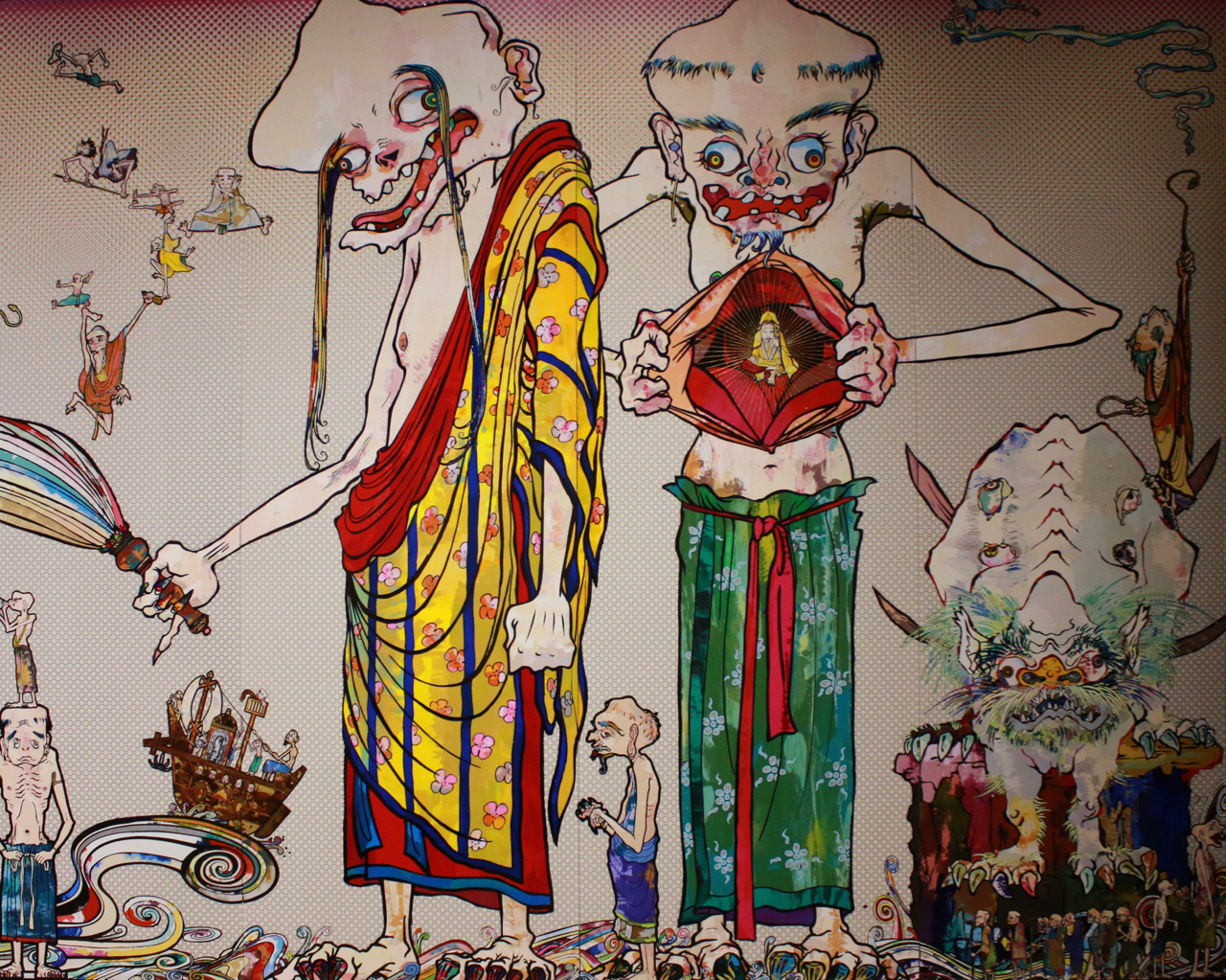 The studio system that Murakami has optimized over the last two decades is just as interesting as the painting itself. His 9000m2 studio space had to be renovated to fit 50m sections of The 500 Arhats painting. Over 200 art university students were recruited from across the country, similar to how Japanese talent scouts discover new idol singers. The staff were then divided into shifts that spanned the full 24 hours per day. The days started with radio calisthenics exercises and morning meetings to confirm the daily work schedules for each artist/worker. Workflows and maps of placements of each of the 4000 silk screens to be applied to the painting were developed. Research teams collected over 100 file books of material on each of the 500 arhats, mythical creatures, monsters, and background motifs. Of course, every element to be included in the work was personally drawn or approved by the artist himself. Some may criticize his efficient studio system as being a product of greed, but it is more likely a result of the artist’s desire to have more time to devote to fine-tuning the details.

Please click on the thumbnails above to see much larger images of the 500 Arhats. The images were photographed section by section and stitched together in Photoshop, but they are no substitute for standing in front of the painting and admiring the awe-inspiring and painstaking details that Takashi Murakami included in each square-inch of the panels. 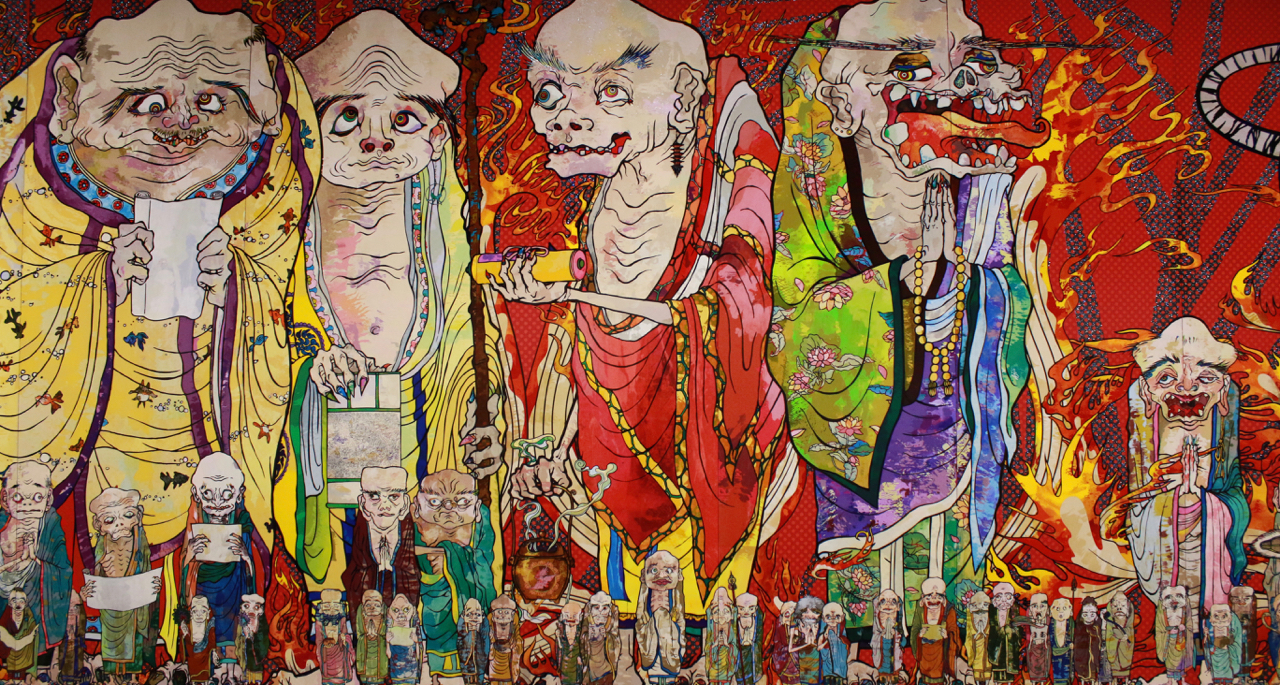 The two videos below should give a better spatial sense of the enormity of The 500 Arhats.