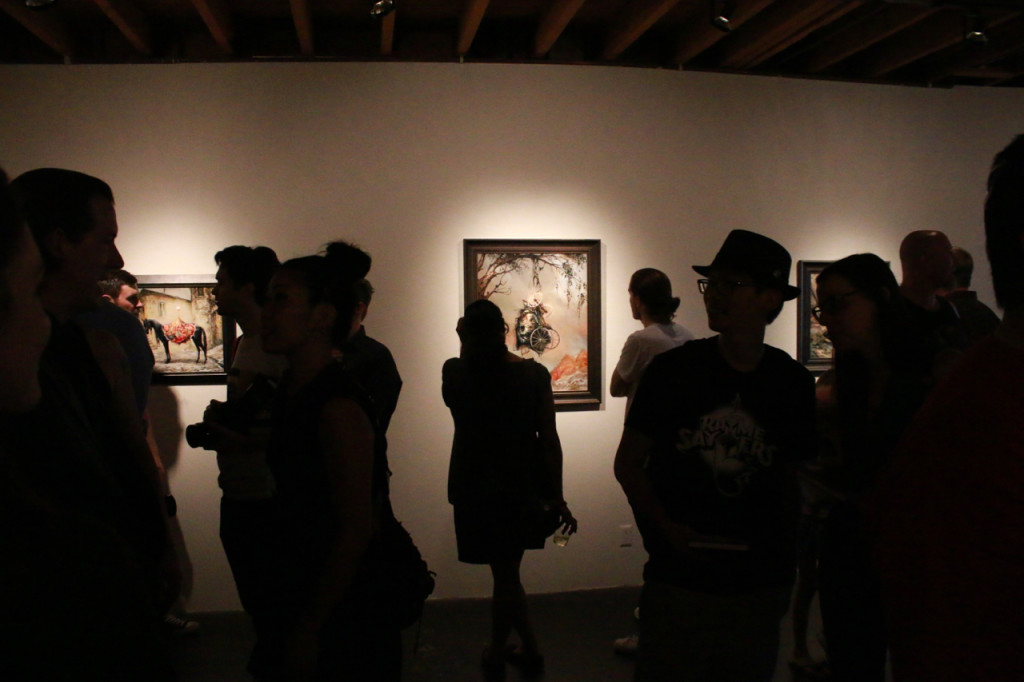 What a turnout for Thinkspace Gallery’s newest sold-out exhibition, a three-man show by Aaron Horkey, Esao Andrews, and Joao Ruas titled “The Gilded Age”.  A line to enter the show started forming around 5:30pm and by start of the show at 6pm the line was easily 60 people strong.  The line continued for the remainder of the night.

Aaron Horkey and Joao Ruas each brought 9 new works for the show, and Esao brought 8 new works, including a massive 48″x36″ piece, the largest piece in the room.  Not only in the artworks themselves, but the attention to detail in the presentation (Aaron Horkey painstakingly lettered the title under each piece by hand)  could hardly go unnoticed.  There’s a lot of pictures to be shared so I’m going let the pictures do the talking.

Click through the link to view 48 pictures from the show.

END_OF_DOCUMENT_TOKEN_TO_BE_REPLACED

There’s a quite a few exciting show openings in Los Angeles next weekend.  BDAB will be in attendance for at least a couple of these, so drop me a line in the comments if you’re going too.

Don’t call it a group show.  It is a three-man exhibition between Aaron Horkey (@aaronhorkey), Esao Andrews (@esao), and Joao Ruas (@feral_kid).  The idea for this show first came about back in 2012 when Thinkspace Gallery’s head honcho Andrew Hosner (@thinkspace_art) casually asked Andrew Horkey about his ideal three-man show, to which Horkey quickly named off Esao and Joao.  Each of these artists have been heavily promoting the show with teasers of works-in-progress and it’s looks like it’ll easily be the show of the year in Los Angeles.  Be sure to sign up for Thinkspace’s email list or follow them on social media for more information.

Varnishing & finishing touches. The exhibition "The Gilded Age" opens on Sept 12 at Thinkspace Gallery. I will be showing alongside @aaronhorkey & @esao #gildedage2015

This is the first solo exhibition in United States since 2012 of the self-proclaimed “adventure painter” Anthony Lister (@anthonylister).  The Australian street artist has been busy on the streets of LA in the last week hitting up walls to promote the show.  New Image Art (@newimageart) knows how to throw a party, so it should be a good show to attend if you’re not doing much this Friday.  Even if you are, this will probably be better, so go to the show anyways.

Mark Whalen (@mark_whalen) is another Australian artist showing in Los Angeles next weekend.  Merry Karnowsky (@kpprojectsmkg) has been kind to the BDAB collection in the last few years, although they probably don’t even know it.  From the looks of it, Mark is preparing a large installation, much akin to the large scale outdoor work he’s done in the past.

It’s going to be a fun weekend.  See you guys at the shows!